The importance of gender equality in the enlargement process has been emphasised in various EU documents, while the European Commission’s Country Reports have repeatedly recognised a number of challenges that Western Balkan (WB) countries face in achieving gender equality. The gender (in)equality picture portrayed by the EC comes increasingly close to the illustration of the greatest gender equality issues as defined by the civil society organisations (CSOs) from the WB: gender-based violence, political participation and decision-making, lack of gender mainstreaming, gender stereotyping and discrimination in the labour market.

In their efforts to achieve equality, all WB countries’ independent bodies are public institutions with a mandate to deal with gender (in)equality. Nevertheless, the institutions overall are under-resourced and characterised as weak and inefficient in ensuring gender equality and protection of rights. On the other hand, the CSOs across the region have been the main driver for development of national gender policies enhancing and promoting gender equality through various activities and programmes. The mutual relations of CSOs with the institutions have always been complex with a fluctuating level of impact on policymaking of the former. Thus, even though public institutions have to some extent accepted cooperation with CSOs as needed, the institutionalised practice is missing, along with well-defined mechanisms for cooperation.

Whereas national authorities are still largely characterised by poor monitoring and evaluation practices and capacities, CSOs have stepped in and provided monitoring and reporting on specific indicators and gender equality policy documents. However, a systematic approach is lacking and no regionally comparable monitoring has been put in place.

Other documents prepared for the 2018 London Summit can be found here. 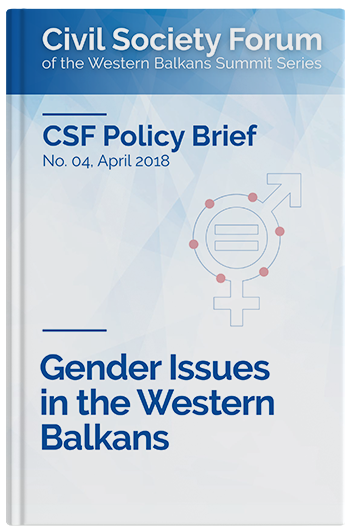