If the EU does not count the Balkan countries among the stakeholders who should participate, in some form, in the upcoming Conference on the Future of Europe (CoFoE), then one has to wonder whether the Union is still serious about the European perspective of the region.

The EU should allow political leaders and citizens from the Balkan countries to join the activities and discussions held in the context of the CoFoE on a consultative basis, along the representative and citizens’ dimensions of the process, respectively. In doing so, the EU would build on the precedent of the European Convention of the early 2000s.

The EU has nothing to lose and everything to win by deepening and refining its relationship with the Balkan countries, by allowing the region to feel included in its plans for the future of the EU. The Union would use the interdependence with the Balkans to good advantage, strengthening natural alliances with its neighbours and consolidating its political vicinity. Deliberating over joint responses to specific common challenges addressed by the Conference would help the Balkan countries continue to build experience and know-how in preparation for their eventual EU membership. Allowing the Balkans to witness and contribute to this initiative would also foster a sense of togetherness and partnership that has been lacking from the long, drawn-out formal accession process. More, rather than less, EU-Balkans cooperation and coordination will build trust and loyalty.

In the end, even without a formal invitation to accompany the CoFoE process, the Balkan countries should organise themselves at the political and societal levels to follow the Conference and mirror its activities with similar initiatives. The Regional Cooperation Council could help organise and coordinate a network of Balkan politicians tasked by their governments to follow and participate in the Conference. In parallel, civil society networks in the region should build on their already existing cooperation and look for funds to organise ‘Balkan Citizens’ Consultations’, which can accompany the CoFoE process as it unfolds. Such a broad mobilisation would prove the Balkan countries’ strong will to approach the EU and a certain dose of political maturity.

But the Union should know better than to just wait to be impressed by the Balkans. The EU is one CoFoE invitation away from leaping forward into the future, together with its strong partners and closest neighbours, as Commission President von der Leyen referred to the Balkans in her State of the Union address.

This discussion paper is developed in cooperation with the Brussels-based think tank European Policy Centre (EPC), and is thus also published at epc.eu.

This discussion paper is available only in English. 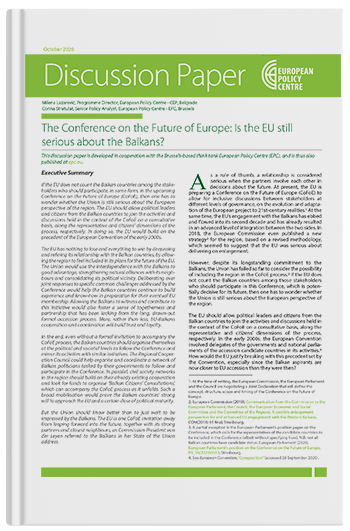