Ever since its inception, the number of those supporting the Template model of staged accession to the EU has been sprouting. Primarily, this applies to the EU stakeholders from several member states who have recognised the Model’s potential to reform the enlargement policy. Moreover, the acquired feedback has been valuable as it allowed the authors to refine the Model further. The collected comments and reactions were used to produce a follow-up publication focused on addressing the four key concerns of EU stakeholders.

As the ensuing discussions with the stakeholders from the Western Balkans have also brought to light certain regional dilemmas and concerns, this paper seeks to discuss and respond to those most frequently encountered. This includes the worriment that the Model would:

Deflating these concerns is highly important considering that the implementation of the Model would greatly benefit from strong support and ownership in the region. 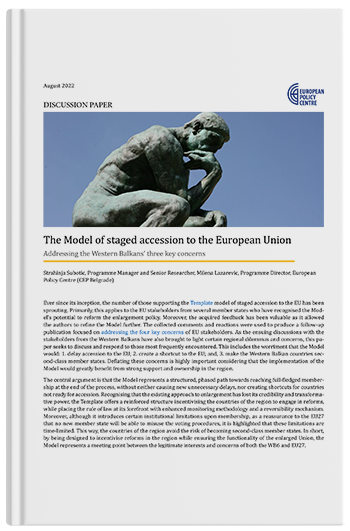