The Conference “Europe Complete“ was held

The concept of Europe Complete extends beyond the European Union and it also envisions the Western Balkans as an essential piece of the European puzzle. By emphasising that the Western Balkans can be a credible partner on whom the EU can rely on in both times of peace and crisis, we want to usher the path to discussions on how best to accelerate intra-European integration. This event is registered at the Portal of the CotFoE, the online and multilingual hub of the CotFoE, which represents a step forward in erasing the divisions and distance between the EU and the Western Balkans.

At the event, keynote speeches were delivered by H.E. Emanuele Giaufret, Head of the EU Delegation to Serbia, H.E. Damjan Bergant, Ambassador of Slovenia to Serbia (TBC), Srđan Majstorović, Chairman of Governing Board, CEP Belgrade, Milena Lazarević, Programme Director, CEP Belgrade, Janis Emmanouilidis, Director of Studies, EPC Brussels, as well as 15 experts from both the region and the EU.

Within the Conference, four panels were held: Towards a Model of a Phased Membership; Boosting European Strategic Autonomy; Busting the Myths – Making Enlargement a Win-Win Situation; and European Youth: Addressing Digital Challenges.

A video recording of the event can be viewed here.

“Europe and the Western Balkans share a common history and have a common future“, EU Ambassador to Serbia said.

Ambassador Giaufret stated that the EU enlargement policy to the Western Balkans does not have an alternative.

“The COVID-19 pandemic showed that we are stronger together. The EU and the region are facing the same challenges. The pandemic pointed out the importance of solidarity and the dangerousness of isolation. Border closing is not a solution, but cooperation in public health, vaccine production and distribution is“, EU Ambassador to Serbia concluded.

Ambassador of Slovenia to Serbia stated that Slovenia put the integration of the Western Balkans into the EU as a high priority of its current Presidency of the Council of the EU.

“Our focus is directed on the inclusion of partners from the Western Balkans. The European Union has four reasons for the integration of this region: geographic, political, economic, and securital. From a Slovenian perspective, we want the Western Balkans in the EU as soon as possible. We have close political, economic, and cultural connections. I hope that during the Slovenian Presidency we would move towards that goal”, Ambassador Bergant emphasised.

Chairman of CEP’s Governing Board, Srđan Majstorović, assessed that the EU accession process is not producing desired results.

“New methodology should bring an acceleration of accession negotiations process, but it is not giving results. We propose that the accession process benefits be advanced, so citizens could become aware much earlier of the benefits of the EU membership”, Majstorović said.

He added that by progressing in fulfilling the conditions for joining the EU, candidate countries will gradually move from one phase to the next, achieving concrete progress.

“It is a process based on rewards for more successful and strict control of those who lag behind in that process”, Majstorović stated. 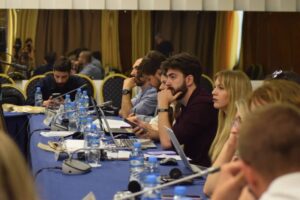