The assessment of the public administration and the capacity of the administration, which is regularly carried out by SIGMA and which the European Commission uses in its assessments of Serbia’s progress to EU, is limited to state administration. The methodology for monitoring public administration carried out by think tank organizations in the countries of the Western Balkans within the framework of WeBER projects also focuses on the work of central institutions. On the other hand, the fact that over 70% of EU legislation is implemented by local self-government units indicates the need to shift the focus, if not completely from the central to the local level, then at least extend it to improving the work and strengthening the capacity of local governments. Through the application of methodological tools, therefore, it is necessary to strengthen the capacity of local civil society organizations to deal with the monitoring of public administration reform at the local level, and to influence the improvement of local regulations, policies, procedures and services through cooperation with local authorities. 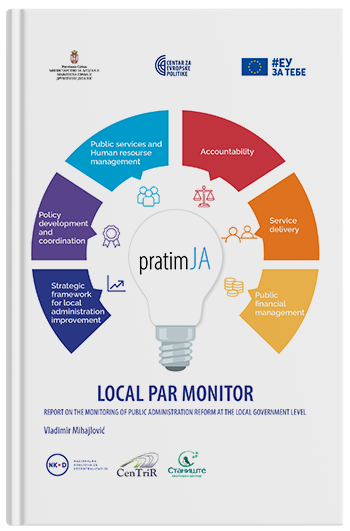