A touch of optimism has returned to Brussels.

The decision of the European Council, made on the 22nd of June in 2017, to establish the so-called “Permanent Structured Cooperation” (PESCO) in the area of the Common Security and Defence Policy (CSDP) of the Union, represents, in a way, one of first indirect consequences of Brexit on the EU progress. This decision suggests the possible outlines of the development of the “Multi-speed” European Union, which is a possibility widely spoken about in EU circles after the British referendum. After a series of crises, institutional paralysis and the shock of the Brexit, followed by more positive results of elections in France, Austria and the Netherlands, a touch of optimism has returned to Brussels. “Europe is on the move again” (Europe is in a new movement), would be the comment by one of its “fathers”- Jean Monnet.

In this CEP Insight, read about Permanent Structured Cooperation, what is the future of defence in the EU and what significance the current events have for Serbia. 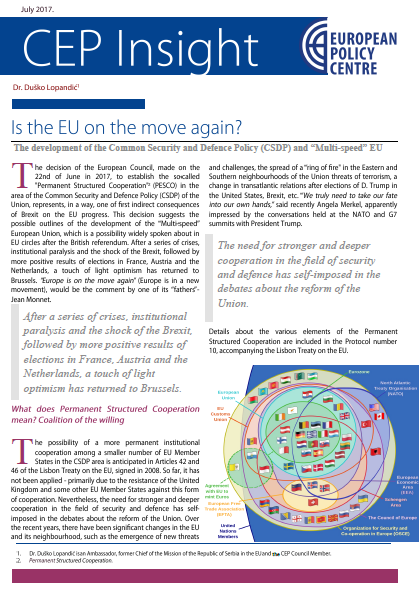