The analysis represents the first major attempt to critically evaluate the main factors that influence the scope of EU’s power to make Serbia meet the requirements in the two chapters, in order to further advance in the EU accession process.

Compared to the previous enlargement rounds, the EU has been placing much greater emphasis on the quality of the implemented reforms in the Serbian (and Montenegrin) case. It has required from Serbia to monitor the achieved results, demonstrate a track record of implementation of the enacted legislation, improve administrative, institutional and financial capacities as well as the resources for the provision of reliable statistical information. In that respect, the EU has introduced the benchmarking mechanism, whose rationale is threefold: to help the candidate country in attaining the EU requirements, by making them more concrete and publicly transparent; to help the EU in measuring effects of the candidate’s undertaken actions and provide critical assessment; and to help “navigate” the entire accession process, by setting the requirements which need to be attained in order to progress to the next step in this process. In short, benchmarks are supposed to translate the EU’s rhetorical commitment and insistence on “fundamental” issues (among which is the rule of law), enshrined in its strategic documents on enlargement policy, into the realities on the ground.

This analysis aims to take stock of the effects of the EU’s benchmarking system on a sample of issues within the Chapters 23 and 24 in Serbia’s EU accession negotiations, pertaining to the following fields: independence of the judiciary and professionalism; freedom of expression; anti-discrimination policy; prevention of corruption within the civil service system; prevention of corruption at borders; asylum policy, and intelligence services. The sample was selected following a mapping of benchmarks that are common or similar among the Western Balkan aspirants for EU membership, for the purpose of achieving regional comparability. The analysis represents the first major attempt to critically evaluate the main factors that influence the scope of EU’s power to make Serbia meet the requirements in the two chapters, in order to further advance in the EU accession process. Although the short timeframe between the opening of the two chapters (July 2016) and closure of this study (January 2018) narrows down the possibility of extracting far-reaching conclusions, the findings of this analysis are expected to enrich the debate on how to render the rule of law related reforms, implemented during the EU accession process, sustainable, which is in the interest of both the EU and Serbia.

Find Regional Analysis, as well as analysis for other Western Balkan countries here. 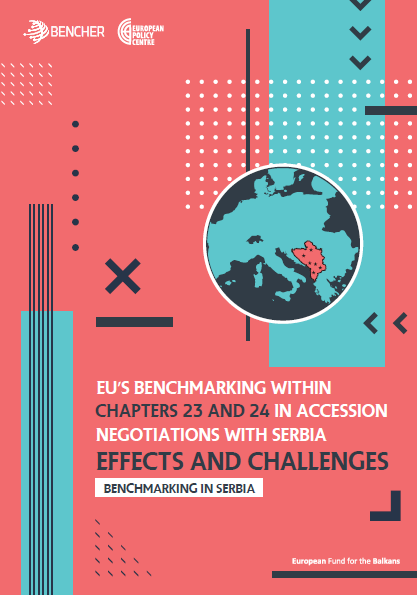