In the early hours of the 24th of June, the results of the British EU membership referendum were announced. Against the betting odds, against the predictions of market actors, and against the last minute polls, with a turnout of 72.2% and with a margin of 3.8%, the voters decided that the UK should leave the European Union.

This unprecedented event has ushered in a period of political and economic turmoil in the UK: David Cameron re-signed and the Conservative Party will hold a leadership election; the Labour shadow ministers resigned en masse and the Labour MPs held a no confidence vote against their leader; the second Scottish independence referendum is on the agenda; Northern Ireland’s status is under question; economic forecasts are grim. Economic spillover effects are expected across the EU, its neighbours and beyond, and potential political instability within the EU looms.

The Brexit referendum has left the continent with a number of uncertainties. This insight develops three possible outcomes of the current situation, based on which it discusses potential consequences of the leave vote on the EU enlargement policy. It argues that as long as the Brexit issue remains unresolved, the EU enlargement policy will suffer.

With support of Tijana Stojanović. 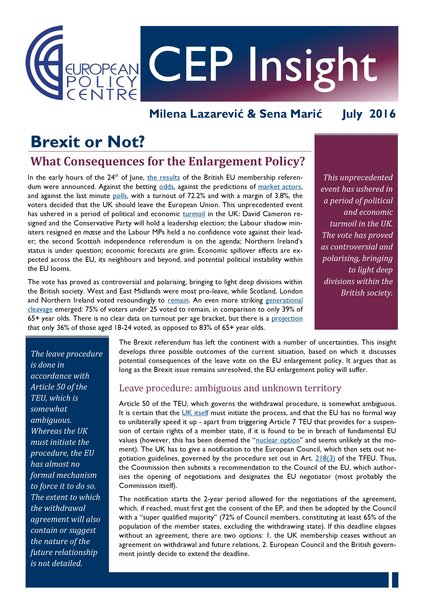