The enlargement of the European Union to the Western Balkans is still an uncertainty, fifteen years after the countries of the region were promised a European perspective at the 2003 Thessaloniki Summit.

In early 2018, a credible European perspective was reiterated for the six countries. However, the countries are still far from ready for membership and the EU is not coherent in its resolve to let them in, in spite of the many geo-strategic, political, economic and security arguments in favour of their more immediate membership. A number of them were recognised by the European Commission in its latest enlargement strategy for the region. Moreover, further enlargement to the Balkans seems to be an undesirable development for a large part of EU citizens, which may be a cause for lingering hesitation by the political leaderships of several member states. At the same time, the protracted EU association and accession process risks disappointing and alienating the citizens of the Balkan countries from idea of integration and reducing the political elites’ incentives to comply with increasingly rigorous membership conditionalities. Is there a way to reconcile all these challenges and secure the region’s accession in the foreseeable future, thus consolidating its European inclination, including a clear commitment to the EU’s democratic values, peace and stability?

This discussion paper argues that the answer to this question lies in reinventing the EU’s approach to enlargement by integrating a post-accession conditionality mechanism which would ensure that these countries’ governments are kept in check in a credible manner after they become EU members.

The author discusses potential points of criticism that this proposal might encounter and offers a way forward for its design and implementation. 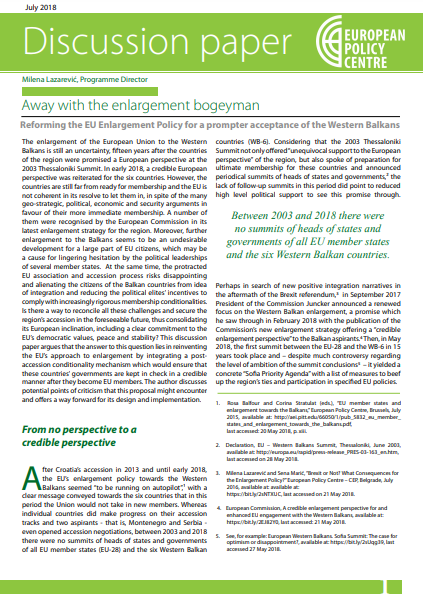