Despite a considerably assertive and costly media campaign, the Hungarian Prime Minister Victor Orban did not manage to convince the majority of Hungary’s citizens that the issue of migrants/refugees is the most critical “for their own future and the future of Europe”.

The 43,4% turnout (out of which 6% of votes were blank/invalid) at the infamous “quota referendum”, point to the fact that exploiting the topic of migrants in a populist manner is not sufficient to mobilise the general electorate, worried about everyday issues, such as economic conditions. The referendum campaign, aside from presenting the migrants as a security threat, blamed Brussels for wanting “to take away a part of Hungary’s sovereignty”. However, the Council Decision has so far proven to be ill-fated in any case – one year since it was adopted, the member states have relocated only 5.2% of the agreed number of asylum applicants from Italy and Greece (5,651 out of agreed 106,000 persons). Hence, this referendum does not carry relevance even from the perspective of the implementation of this Decision, given that practically all member states have been failing to enforce it so far 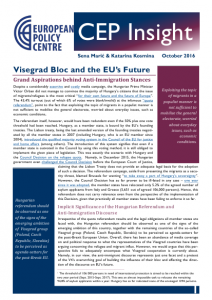