The overall aim of this Insight is to encourage further discussions on what lies ahead for the Balkans in the post-Brexit Europe.

In the aftermath of the Brexit vote in March 2016, European Policy Centre (CEP) published an Insight where it presented three possible outcomes of the withdrawal negotiations: 1. “The UK maintains political stability, withdrawal negotiations swiftly concluded”; 2. “The political scene in the UK remains unstable, Brexit happens after extended and painful negotiations”; and 3. “Brexit does not happen”. Two years later, reality seems to bear out the second scenario. Whereas the negotiations have proven to be quite difficult to handle, this scenario has ill-suited both negotiating sides. But what about the Balkans? Now that Brexit is reaching the end, this CEP Insight reflects on its potential political and economic implications for the Western Balkans (WB). 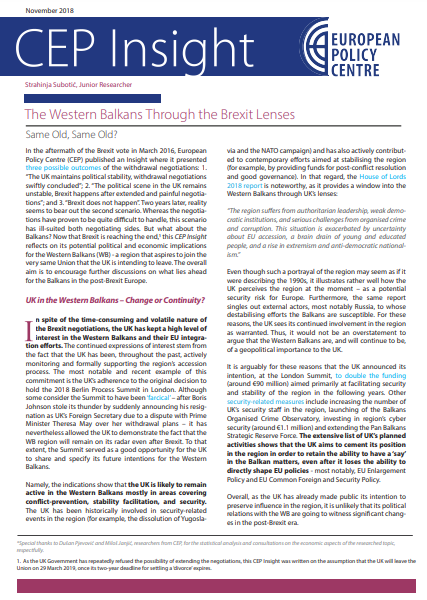