Although public administration reform (PAR) is recognised as one of the three pillars of EU Enlargement, nonetheless, neither acquis communautaire nor separate negotiating chapter exists for this area. Therefore, the European Commission (EC) had to come up with a new mechanism for monitoring the progress of candidate countries in this field. Thus, in 2014, the EC and SIGMA have developed Principle of Public Administration which encompass six areas. Within the document, the key elements of good governance are included, i.e. the requests that countries should complete in order to become a successful EU member country one day. In 2015, SIGMA conducted a detailed analysis of public administration in all candidate countries and potential candidates for EU membership.

Recognizing the importance of expertise and characteristics of servants (qualifications, competencies, motivations and values) for establishing an effective administration, one of the areas in the Principles concerns public service and human resource management (HRM). The baseline values for Serbia in this area are presented in detail in the 2015 Baseline measurement report while the first overview was made a year after. Besides presenting the state of play, the mentioned reports pointed to key problems of civil service and contained measures which should be implemented with the goal of removing them. Accordingly, in the previous period, Serbia began certain reform processes in this area. However, the new Report, which SIGMA published in December of 2017, highlights the fact that some key problems are still present. 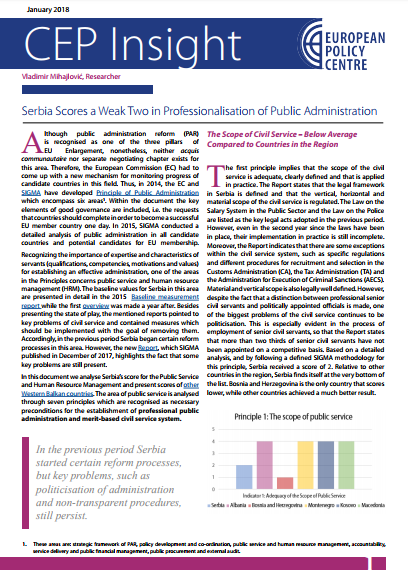