With transparent insight into decisions of public interest, citizens in democratic societies have the opportunity not only to be informed but also to point out shortcomings and demand accountability, thus creating an unbreakable link between transparency and public accountability for the results achieved. Public reporting about work and performance is one of the ways to ensure government transparency in practice. In Serbia, the long-standing problem of non-transparent annual reporting on the work of the Government and the administration results in a lack of accountability towards citizens.

It should be said that public administration reform (PAR) has been a strategic commitment of the Serbian Government. Similar to the previous one, the new PAR Strategy 2021-2030 aims to improve transparency and accountability at all levels. At the same time, tangible progress in this reform is one of the prerequisites for the successful European integration of Serbia. The issues of transparency of work and results are elaborated in detail in the Principles of Public Administration of the SIGMA programme, which serve as a guide for this reform in the EU accession process.

However, despite the dual importance of government transparency, the findings of the WeBER PAR Monitor show, for the second time, that there is still much room for improvement in this field, as public reporting practices are irregular, unpredictable, and almost completely unsuitable for meaningful public oversight of the results of both the Government and the state administration bodies. 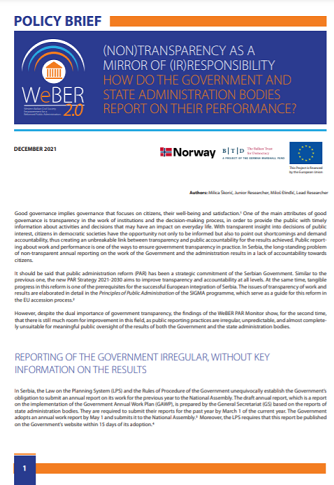