The complex system of governance of the European Union often blurs the distinction between where decisions are made and who is responsible for them. One of the major institutions that steer the direction of EU policies is the Council of the EU which is run by member states based on a model of rotation.

In order to ensure continuity in the Council’s decision-making process, the notion of the Trio Presidency was introduced with the Lisbon Treaty in 2007, which defines it as “pre-established groups of three Member States for a period of 18 months taking into account their diversity and geographical balance within the Union”. The Trio sets long-term goals and prepares a common agenda with the major issues that will be addressed by the Council over an 18-month period. In order to better grasp the recent key developments in the Union, the work of the Council in the last year and a half is the focus of this CEP Presents (July 2020 – December 2021).

As part of rewinding the past year and a half, the paper sets out to examine the policies adopted during the watch of Germany, Portugal, and Slovenia, as well as to provide an overall assessment of the degree to which the 18 month Programme of the Council was accomplished. Moreover, it argues that although the COVID-19 pandemic has caught the EU off-guard, the tenth Trio has managed to push for an effective and joint response to the health crisis thus making the Union more united than before.

As these activities corresponded with the Conference on the Future of Europe, European debates also served as a good platform to explore additional avenues for better equipping the Union to address future crises. In the context of the enlargement and the pandemic, although the Union has kept sending medical and financial assistance, the Trio was ultimately less successful than originally expected in accelerating the pace of the countries of
the region on their path to the Union. 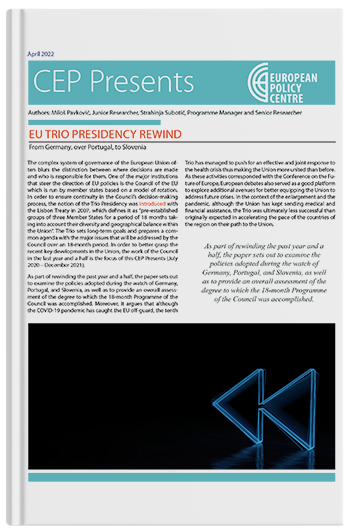