Presiding over the Council of the EU is a complex task that requires significant leadership and political skills. After another round of rotation, the turn has come for the Czech Republic to head the Council for a six-month period. This will be the second Czech presidency since this country acceded to the EU in 2004. This time, however, presiding over the EU will be much more challenging.

Having in mind the war in Ukraine and its consequences in the form of constrained economic recovery previously caused by the pandemic, the refugee crisis and energy crisis can be expected to dominate the Presidency’s agenda. The aim of this paper is to examine to what degree the Czech Programme will be occupied by the consequences of war development on the EU’s eastern borders, and what kind of policy solutions and attempts to set them in motion will Czechia offer.

Judging by the Presidency slogan, which is Europe as a Task: Rethink, rebuild, repower, it can be anticipated that rethinking European geopolitical position, rebuilding Ukraine after the bloody war, and repowering the European defence structures will be the focus of the Council’s work in the upcoming six months and longer. While some Council presidencies aim to finalise long-running legislative priorities, Prague largely sees its job over the next six months as a crisis responder. Czechia will have its hands full forging common positions on financial and political support for Ukraine, and reducing the bloc’s continued reliance on Russian energy. Having in mind the presidency programme and volatile geopolitical developments, this paper also aims to uncover whether the Council will have enough time and energy to dedicate to the enlargement policy and the Western Balkans region under the Czech baton. 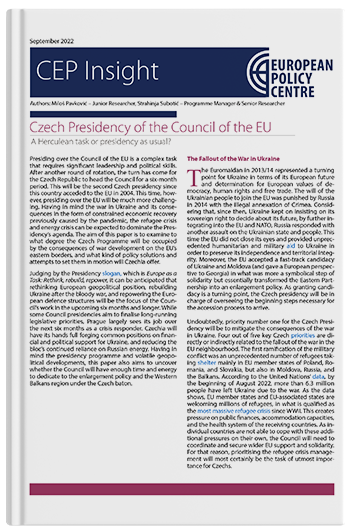