Despite a successful implementation providing for a zero tariff trade across the region, the trade within the CEFTA area is inhibited by numerous non-tariff barriers to trade (NBTs). Waiting time at crossing points in CEFTA generates up to 800 M€ per year.

Balkan Six partners have been struggling to conclude legally binding agreements needed for turning regional markets into an single area without internal obstacles for free movement of goods, services, work force and capital. Indeed, failure to do these is reflected in the costs of doing business, lost opportunities and slower pace of CEFTA trade facilitation. Regional market remains fragmented. Innovative Policy Proposal (IPP) identifies mutual mistrust in CEFTA Parties’ trade related documents as a major source of the NBTs.

Distributed ledger technologies (DLTs) or blockchains are capable of building trust between parties regarding authenticity of their data with disintermediation. Namely, the blockchain tech minimizes the amount of trust required between the equal partners to transact due to the smart contract functionality that enables automatic enforcement of terms and conditions embedded in the agreed protocol of the distributed ledger.

Indeed, the Economist coined the blockchain as a machine for creating trust, an ultimate trust machine. To many, blockchain technology lacks a sufficiently proven and robust use case in the public sphere. However, in current times that do not lack excuses, being good or bad, to create new trade headwinds, to sleep on the blockchain potential can generate lofty opportunity costs for CEFTA parties.

This paper won the first place in the competition “CEFTA – regional trade area and beyond: Call for Innovative Policy Proposals” which was announced on the occasion of ten years of CEFTA 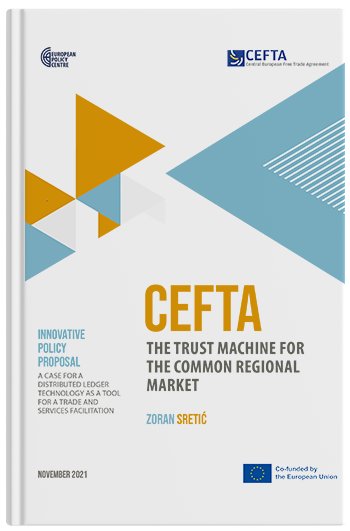