This paper suggests the need to change the current approach and structure of the EU Enlargement Policy.

The previous year, 2017, was the year of annunciation of the return of the EU Enlargement Policy. The European Commission President J. C. Juncker, in his State of the Union Speech, and later in the letter of intent directed to the European Parliament in September, mentioned the need for defining a clear time perspective for the accession of the leading candidates Serbia, and Montenegro to the European Union by 2025. E. Macron, the President of France, reacted similarly in his speech on the future of the European Union in September at the Sorbonne, which is especially important for political legitimacy of the announced return of the enlargement policy into the focus of the EU. Even more importantly this idea did not meet any serious opposition, despite the obvious rise in populism and the lack of attractiveness of the topic of further enlargement in the EU Member States. All of this indicates that the relationship between the EU and its Member States towards the enlargement policy is beginning to change slowly from a very skeptical attitude from the beginning of the mandate of Juncker’s Commission to the announcement of a credible enlargement strategy and defining the time frame for the most successful candidates.

This paper attempts to draw attention to certain essential elements that should be included in a new, credible EU Enlargement Strategy. Proceeding from the assumption that the approach “business as usual” is unproductive and can lead to demotivation of candidates (and potential candidates), on the one hand, and the EU and its Member States, on the other. 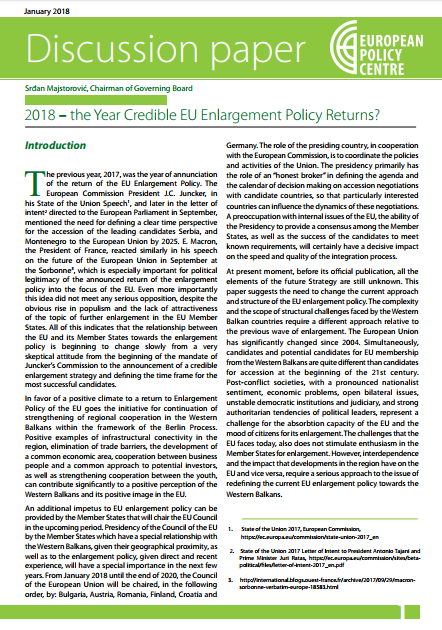